Not for the Faint-Hearted

While training to become a top chef is hard enough in its own right, with so many different tools and techniques to get used to, French cuisine is typically one of the hardest to master. This is partly due to the ingredients you’re likely to work with, but also because of some of the techniques involved in cooking them. However, there are a few chefs out there who have nailed this cuisine down to a fine art (and no, they aren’t all French):

Alain Ducasse is probably the most well-known French chef of this era. He is a pure genius when it comes to food. He is a master of all things relating to French cuisine and holds more current Michelin stars than any other chef in the world – a staggering 19!

He even sent some of his culinary delights into space for astronauts at the International Space Center to chow down on.

Gordon Ramsay is a 7 Michelin star chef and a Scottish-born celebrity chef. He has proved his cooking abilities time and time again, even with the French cuisine. You’ll find many a sumptuous delight on the menu at Gordon’s fine-dining French restaurant Au Trianon, including Blue Lobster and Spiced duck from Les Dombes.

Despite the fact that she’s never had any formal culinary training, Anne-Sophie Pic has no less than 8 Michelin stars under her belt. Being a native of France, Anne-Sophie has mastered the gastronomy of the country very well and has some amazing dishes, including a very tasty sardine rillette with whiskey, creamy cauliflower.

Thomas Keller may be American, but this Californian-born chef has made a huge impact in the world of French cuisine in both his native home of the USA and France. With 7

Michelin Stars is currently in his prime. This culinary prodigy has many great dishes to try, including Smoked Salmon Crisps and one of his most famous of all entrees – Oysters and Pearls.

Learn more about famous chefs by subscribing to this channel. 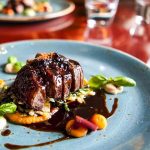 Pop your email below and hear about the very latest deals and website news first.